All you need to know about the recently concluded European Championships. After a breathtaking month of football, the whistle has finally blown on the Euro 2020 championships. In the last few days, football fans have tried to adapt to life after the Euros, but it hasn’t proved to be the easiest of tasks. This was a competition that delivered remarkable moments from the first minute down to the last. 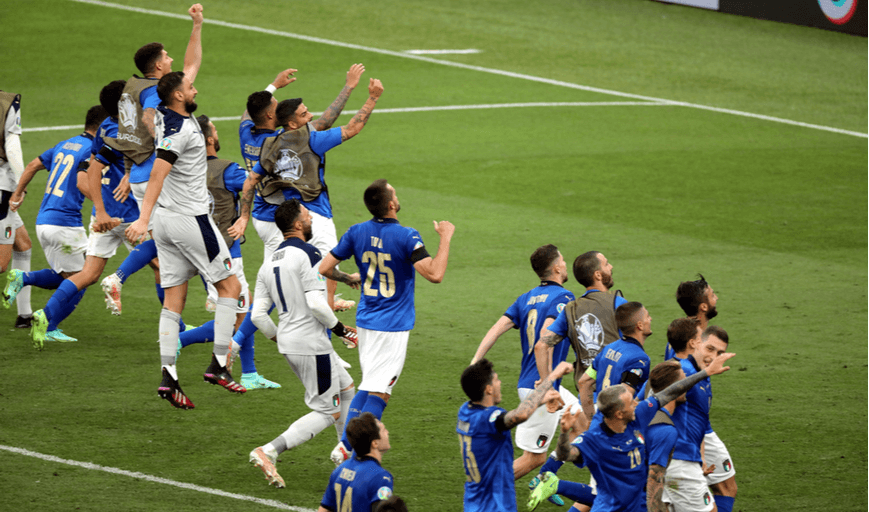 For the first time, the European Championship appeared across the entire continent. In place of a single host country, 11 different cities hosted Euro 2020 matches. However, there have been debates about the uneven benefits that came with the new format.

Most of these debates arose in the buildup to the final. Analysts referred to the progress of England and Italy, two teams who played all their group stage matches at home. While the new format added some extra spice to the competition, it also came with challenges of uneven home advantage.

In all, the incredible levels of entertainment we were treated to meant that most fans let it slide. In our Euro 2020 summary, we run through every major highlight of the recently concluded tournament.

The major highlight out of Group A was Italy’s dominance. The eventual champions laid down early markers with impressive 3-nil victories in their first two matches. Wales qualified as runners up ahead of Switzerland, who managed to secure a knockout spot as one of the best third-placed teams.

Belgium qualified as Group B winners and was joined in the knockouts by Kasper Hjulmand’s Danish side who qualified on goal difference ahead of Finland and Russia. The Netherlands topped Group C with ease. Austria came in second and, Ukraine qualified despite coming in third.

Group D played out as one of the least entertaining groups in Euro 2020. The bookies at William Hill tipped the England team to come out of their group unscathed. Despite this, they encountered a slight wobble in a goalless draw against neighbouring rivals Scotland. Croatia secured qualification on the final day thanks to a goal-of-the-tournament contender from Luka Modric.

Group E was a goal fest on the final day; both matches ended in five-goal thrillers. Spain made Slovakia qualify as second, while Sweden passed Poland to the top. Group F, Euro 2020’s group of death, delivered superb attacking football from start to finish. All four teams took points off each other, but pre-tournament favourites France did just enough to earn the top spot in the group.

The knockout upsets began when the Czech Republic defeated the Netherlands in the Round of 16. The Czechs were tipped as underdogs by Paddy Power, and it was clear to see why. Their opponents boasted one of the finest attacking units in the tournament. Regrettably, the Dutch failed to switch on and take advantage of the easier side of the knockout draw.

Pre-tournament odds from Betfair predicted France as favourites to top Group F – the competition’s most difficult group. The French obliged. There was no predicting what followed. The entire football world was left in shock as the World Champions lost on penalties and dropped out of the tournament to an unfancied Switzerland side. France’s shootout loss came after a thrilling 3-3 draw that involved a Paul Pogba wondergoal.

The giant-slaying Swiss team almost pulled off a second consecutive upset when they took Spain all the way to extra time and penalties. There was to be no shootout success for them this time around. The Swiss still exited the competition with their heads held high, having defied most expectations.

The Danes started the competition as second-favourites to come out of Group A according to odds from Ladbrokes. Their tournament began in overwhelming circumstances as they lost star player Christian Eriksen to a cardiac arrest, who is, fortunately, getting better. The distressing incident was followed by two losses that threatened to send Denmark out of the competition.

However, the Danes rallied and put in a scintillating display of football in their final match, ending Russia’s journey. They backed up that display with wins over Wales and the Czech Republic before eventually surrendering to the England team in the semifinal. Luck finally ran out for them. Despite this Kasper Hjulmand’s squad went out as one of the best sides in the competition. Their remarkable unity and resilience certainly earned them a lot of admirers.

For the first time in a long time, an England team had the entire country believing. Most of that hope began after England confidently countered German opposition for the first time in a major international tournament. Gareth Southgate’s men were in control for the entirety of that match, effectively placing obstacles in the way of the German wing-backs.

They followed that up with an impressive win against Ukraine and battled against a resilient Denmark side. The latter result was enough to send England to the final of a major international final, a feat that no other England team had achieved in over five decades.

As the Euro 2020 finals approached, immortality beckoned for the England team. Unfortunately, their dreams were crushed. In the form of penalty heartache, a familiar foe ensured that Southgate’s men could only end the tournament with silver medals. It was perhaps an ironic ending for a team that seemed to have avoided the usual pitfalls that previous England teams have succumbed to.

Roy Keane spoke to ITV after the finals and criticised senior English players in the team for failing to step up to take the fifth penalty that would have sent the shootouts into sudden death.

Despite the finals loss, the progress made by this England team hasn’t been lost on anyone. Semi-finals in 2018, finals in 2021 – they will be a definite favourite for the World Cup next year. 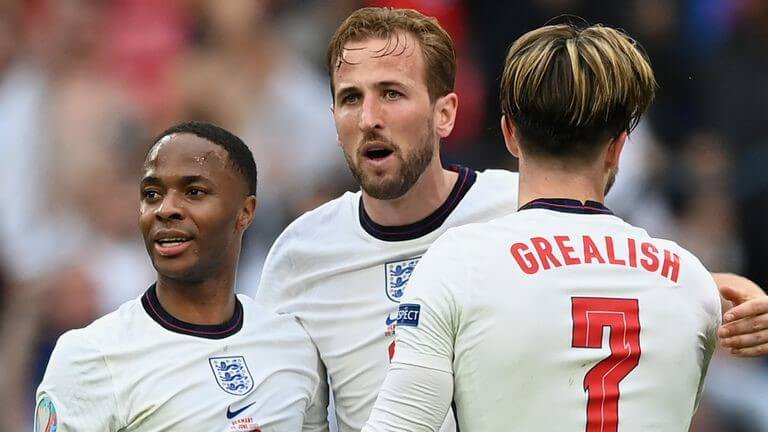 It Went to Rome

UEFA’s official team of the tournament included 5 Italian players. More than anything, it was an indication of Italy’s superiority across the tournament. The Italians played some exceptionally breathtaking football in the group stages.

They could not recreate their group stage sparkle in the knockout, as shown by their two penalty shootouts and one extra-time win. Ultimately, Italy’s veteran centre-back partnership of Giorgio Chiellini and Leonardo Bonucci proved too strong for Belgium, Spain, and England. According to stats from Opta, Italy’s win against England saw them become the first team to win two shootouts in a single edition of the European Championships.

Player of the Tournament

Gianluigi Donnarumma earned the Euro 2020 player of the tournament award. Italy’s 22-year-old goalkeeper was faced with the rather daunting task of replacing the legendary Gianluigi Buffon. These are big boots to fill and he wouldn’t have been blamed if he crumbled under pressure.  However, it was a challenge he appeared to relish. Donarumma’s heroic saves helped his team through consecutive shootouts in the latter stages of the tournament. 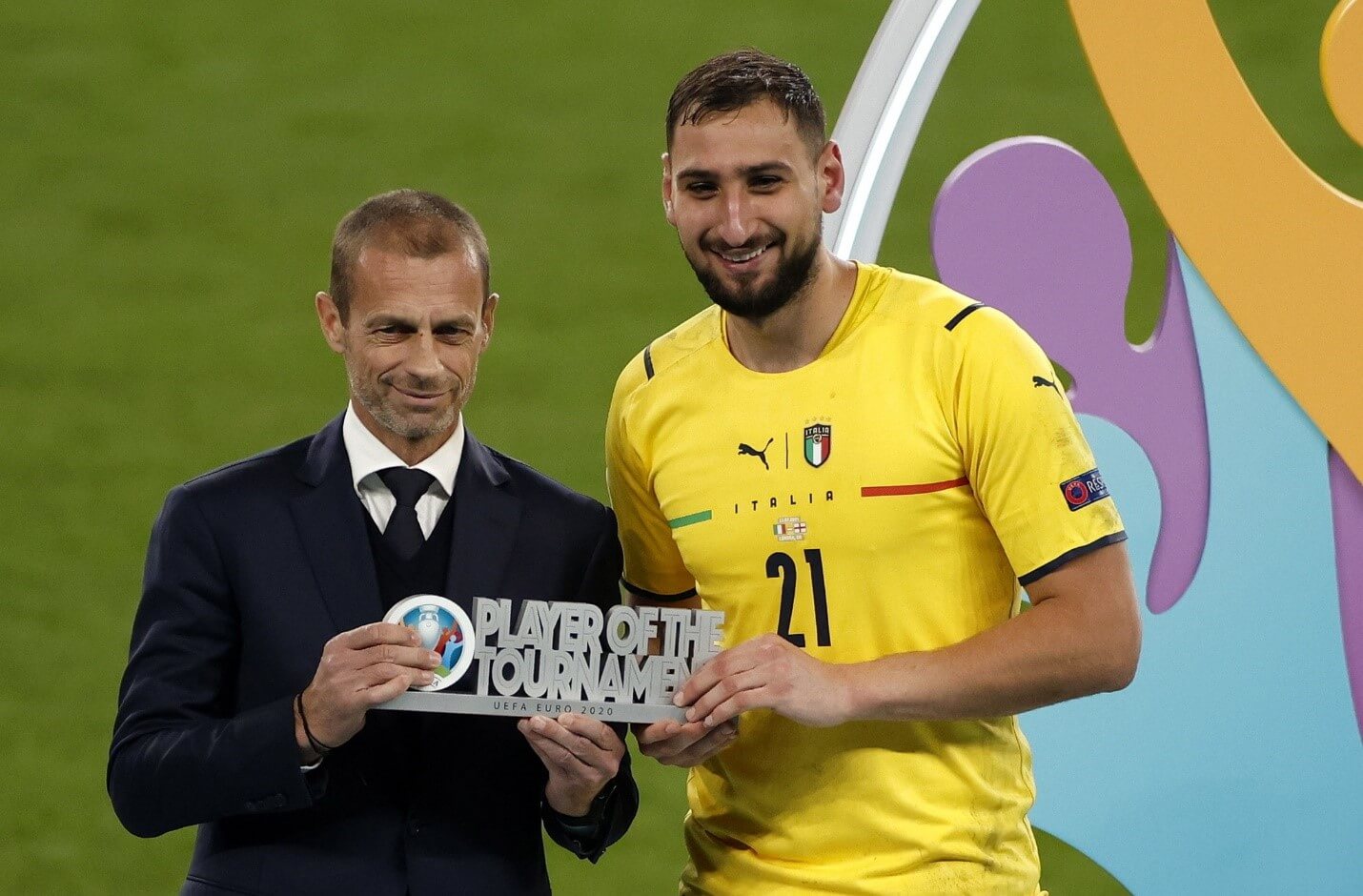 Young Player of the Tournament

The Spanish midfielder, Pedro González López (Pedri), arrived on the international scene with a bang. Pedri was instrumental in Spain’s run-up to the tournament’s semi-finals, as he played almost every minute of every game. The 18-year-old put on a mesmerising show of football in the semi-final against Italy, dominating in the midfield that contained more experienced players. That performance was enough to see him pick up the award for Best Young Player at the tournament.

Cristiano Ronaldo’s five group stage goals earned him the Golden Boot award. At the end of the tournament, he was tied with Patrik Shick for goals scored, but his superior assist record (one to Shick’s zero) served as a tiebreaker. Romelu Lukaku was second-favourites with Betway to win the award, but his quarterfinal exit ruined his chances. The Euro 2020 final goalscoring chart was as follows:

Ecstatic cheers from Italian fans erupted in the away-side of Wembley as Gianluigi Donnarumma dived to save England’s fifth penalty. Their celebrations were equal part delight and relief, having seen their team navigate the lottery of penalties. As it turned out, football went to Rome. And not for the first time. Euro 2020 was the second ever European Championship win for the Italians. The first one was in 1968.

Football fans were treated to a spectacular month of international football. Luckily, we don’t have to wait too long for another football-packed month. Thanks to the COVID-imposed rescheduling of Euro 2020, there’s only one year until World Cup 2022 rolls around.

The 2022 World Cup will revert to the traditional single-host format, which should be enough to cancel out the uneven home advantages from Euro 2020. Will it be the year that the England team finally brings football back home? That remains to be seen. We can only hope that we witness a well-organised and well-planned tournament that matches the hype leading up to it.