It’s been a while since we’ve been to the Wimbledon tennis courts! Now, after a year absence, the crowd will be able to get back and see the games live.

Wimbledon is the oldest and most prestigious tennis tournament in the world, and every June and July, eyes across the world turn to the All England Club to see the best in the world compete for the Wimbledon trophy and Venus Rosewater Dish, the trophies for the men and women’s competitions respectively. This is the last Grand Slam tournament to be played on grass, and it always offers some spectacular games.

Wimbledon 2020 saw the first cancellation of the tournament since World War II. However, with the Australian and French Opens having continued with some adjustments, we are on track for a return to Centre Court. They might only be accepting a 25% capacity, but it will be great to see fans back in the stands! Here’s hoping that the Wimbledon weather will also hold out so that we can get a few weeks of sun and perfect play conditions!

Let’s take a look at some of the players we might see coming out on top at Wimbledon 2021!

The Wimbledon’s Men’s Final, or as they refer to it – the Gentlemen’s Singles Final, is one of the most-watched events in British sport, with the 2019 final attracting a peak audience of 9.6 million viewers in the UK. It takes place on the last Sunday of the tournament, on the prestigious Centre Court. Many who decide to either tune in or even head along to watch from the stands or in the crowd on Murray Mount. Here are some of the players we might be seeing in the Wimbledon final this year!

Novak Djokovic is the current Wimbledon Men’s Champion, and this will be a title that he wants to hold onto with both hands. He is a phenomenal player who has been the No.1 tennis player in the world for over 320 weeks. With 18 Grand Slam titles to his name at the moment, and with 5 of them coming from Wimbledon, he will no doubt be looking to extend this lead as far as he can.

His power on the court is undeniable, and he performs well on grass thanks to his flexibility and ability to quickly adjust. With a cool head and the right attitude, we could see him dominate Wimbledon 2021 as he has done in plenty of previous years. When betting sites like bet365 begin to post their odds for players reaching the final, expect his name to be one of the first ones up.

If not Djokovic then Roger Federer might be one of the most likely to lift the Wimbledon trophy again. The Swiss player jointly holds the record for most Grand Slam titles with Rafael Nadal, and this currently stands at 20 titles. 8 of these are titles from Wimbledon, and he is a popular figure on the grass courts of the All England Club. His legacy as one of the best tennis players of all time is already firmly cemented – from his phenomenal number of wins to his 2020 top spot of Forbes’ Annual Ranking of the Highest Paid Athletes.

He faced off against Djokovic at Wimbledon in 2019, and he will no doubt be looking to return and claim another title if he can. Though grass is a very difficult surface to play on, Federer navigates these courts with ease. His speed and accuracy are just two of his incredible skills, and he is always one to watch when he steps out onto the court.

The current world No. 2 is yet to advance in Wimbledon past the third round, but this could be the year that he does it. He has already been to the final of the Australian Open in 2021, and walked away with the 2020 ATP Finals Singles Champion. This could be the motivation he needs to take him far in Wimbledon.

The difficult thing about playing at Wimbledon is that grass court – it is very difficult to pick up experience at tournaments on grass as there are so few compared to those on clay or hard courts. However, this could also work to Medvedev’s advantage. He is excellent at spotting an opponent’s weaknesses and then playing a smart game to outwit them, all while mirroring their playstyle as best he can. This could put him in a strong position for reaching the later stages of the tournament, and even making it all the way to the final.

Djokovic is the clear favourite by far, there is no denying it. There is likely to be plenty of odds from the bookies leaning towards him, whether they are coming from big names like Sky Bet or smaller brands. He is in fantastic shape and he is likely to dominate the competition as he has done in previous years.

However, Federer and Medvedev, plus some of the other big names in the tournament might be able to offer him some fantastic competition on his road to the top. Though Federer might be heading past his peak as a player, he can still dominate on the court and especially on grass. Medvedev is also on the rise. Though Djokovic is most likely to beat him if they were to face off across a Wimbledon court, there is no denying that Medvedev would definitely give him a run for his money.

It is likely that we will see another Federer/Djokovic battle in the final of the Gentlemen’s Singles Tournament of 2021, but that does not mean that we won’t see some amazing plays along the way! We predict that Djokovic might be able to clinch victory here, but we do think that it will not be easy for him to do so! 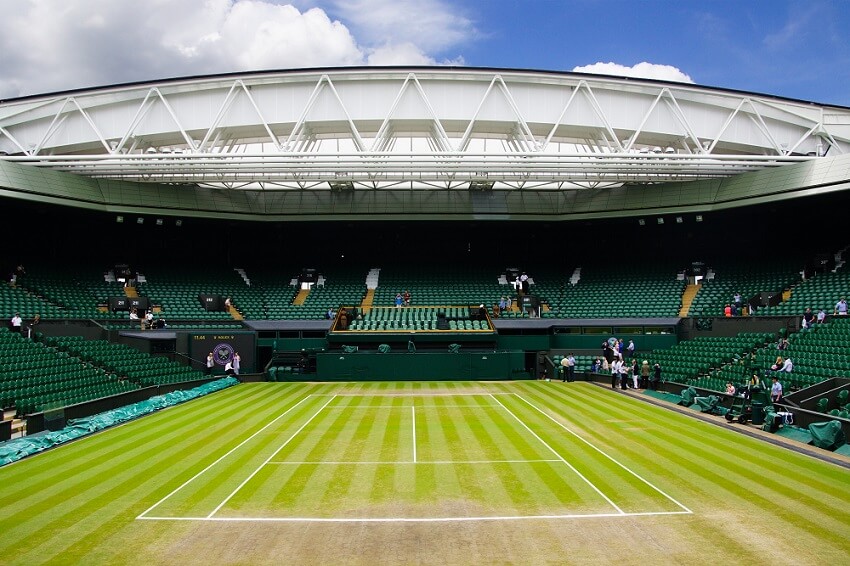 The Wimbledon Women Finale takes place on the last Saturday of the tournament, the day before the men’s and also on Centre Court. As with the men’s tournament, this is traditionally known as the Ladies’ Singles tournament rather than just the Women’s Tournament. Though many focus on the men’s tournament, the women can offer games that are most definitely not worth missing. Many legendary female players have made their mark on the Wimbledon courts, and we should see this continue in 2021 and beyond. Here are some of the players who might lift the beautiful Venus Rosewater Dish this year.

The Japanese player is only 23 and has already risen to dominate the world of women’s tennis. She is a powerful player who has collected 4 Grand Slam titles so far, with two of these being back-to-back. Currently, she is one of the most marketable athletes in the world, and has quickly cemented herself as a household name for both her tennis prowess and her activism.

Like Medvedev, she has not yet advanced past the third round of Wimbledon but she is starting on the back foot, having been knocked out of the first round of the competition in 2019. She has gained a lot of attention and even more experience since then. Though she has expressed that she finds it very difficult to play on grass, it is a challenge that she is willing to take on. If she is going to see success at the All England Club, she needs to make sure that she stays focused on the matches ahead of her, applying her training as and when it is needed.

Ashleigh Barty is currently ranked as the No. 1 women’s tennis player as of writing. She is also the reigning champion of the WTA Finals. Even with her small career break in which she played semi-professional cricket, the Australian player is incredible to watch on the court. So far, she has progressed to the fourth round of Wimbledon.

She is an excellent opponent for Osaka, and if the two of them meet on the Wimbledon courts it should hopefully be a match that showcases the best that women’s tennis can offer. Unlike many other professionals, Barty’s favourite surface to play on is grass. This will put her in good standing as she is likely to need less of a transition period between clay and grass. Coupled with her strong strokes and crafty style of play, she should have a brilliant tournament.

Of course, we must also consider the reigning Ladies’ Singles Champion. Simona Halep faced a legend amongst Wimbledon winners in the form of Serena Williams at the 2019 final. Though she was the clear underdog, she emerged as the Champion – the first Romanian to win a Wimbledon singles title and the player with the fewest unforced errors ever recorded in a Grand Slam final.

She is quite an aggressive player who uses her speed and fluidity to her advantage. She is also thought to be one of the best returners in the WTA. It is likely that bookies like Ladbrokes will grant her favourable odds as she plays her first few rounds of the tournament. Clay and grass are the surfaces that she is strongest on by far, and it could mean that we see her in the final and potentially even lifting the trophy once more.

The women’s competition is likely to be very close. Wimbledon tennis matches can be a little unpredictable because of the grass court, but this might not be much of a factor with the 2021 Ladies’ Singles.

Though Osaka is not the most comfortable on grass, her skills on the court and her ability to adapt to the game at hand are two factors that will work to her advantage here. She is an exceptional player and she is likely to dominate much of the competition.

However, hot on her heels are Barty and Halep. Barty’s preference for grass courts and her strength as a player might see her claim a win over Osaka. Her style of play makes her an excellent all-around player despite her height (as she is on the shorter side for a professional tennis player) and she is likely to do incredibly well in this tournament. Likewise, we can expect a fantastic repeat performance from defending champion Halep, whose aggressive playstyle might upset quite a few as we progress through the tournament.

Ultimately, we think Barty might pull ahead and claim the win, but it is likely to come after a very close and hard-fought tournament.

What to Watch for at Wimbledon

With great excitement comes the long-awaited Wimbledon competition. There was most definitely a Wimbledon-shaped hole in the world of sports in 2020, so we can only hope that this year will be a good one!

One important factor to consider is that this is also the year that the deferred 2020 Olympics will be taking place. As a result, we might see some players holding back and not playing to their full strength, as they want to save their health and energy for a battle for a gold medal in Tokyo. Likewise, we might also see some interesting playstyles and tactics being tried out, as players try to hone the strategies that they are going to take to the Olympic competition with them.

Either way, we can only hope that this is one of the most interesting tournaments in recent history. With a prayer for good health, perfect court conditions, and favourable weather, Wimbledon is ready to get underway once more! We missed it last year, and we cannot wait to see who might be able to come out on top this time!