When it comes to casino games developers, there are a handful of widely recognized names such as Playtech and Microgaming but as with any industry, the established players don’t have it easy, and lesser known games development firms are continually snapping at their heels with games of an increasingly high standard.

BetSoft is one such company, quickly moving in the right direction. BetSoft is a UKGC licensed company based in Malta that specializes in developing casino games with strong visuals and animations. From 3D table games to a selection of hugely impressive slots, right through to casino back-end systems, this outfit is winning increasing praise for their game quality and selection.Run by BetSoft Gaming Limited, BetSoft provides games across an increasing range of prominent casino operators. Check out our recommended betsoft casino sites below. 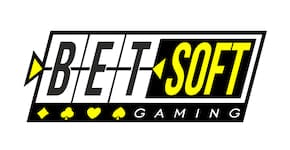 A Guide to BetSoft

BetSoft offers a wide range of casino games and software, working with the full spectrum of casino operators to bring high quality games to players on desktop and mobile. Arguably they are known to most players for their online slots, which combine high quality graphics with 3D animations that bring the cinematic to the slots genre.

Slots3 is the company’s headline product range, which encompasses a series of 3D slots including True Illusions, Alkemor’s Tower and A Night In Paris. While these games in particular have a reputation for being resource intensive, they offer the incredible gaming experience that has quickly become this developer’s calling card.

Beyond their slots games that can be found on online casinos like Rizk and 10Bet, Betsoft also offer a range of table games, plus back-end casino management software online casinos use to run much of their operation. As a marker of their quality, BetSoft have won several industry accolades including EGR Gaming Awards in 2017 and Login Casino awards.

A great selection of games is pretty much a prerequisite for any casino developer hoping to make waves – but what sets BetSoft apart from the crowd? Their slots look like big budget productions, with graphics that wouldn’t look out of place on a silver screen animation. The reels are drawn with incredible attention to detail, and the game themes, bonus features and even the soundtrack all combine to create games that you know have been developed with love.

Even beyond the gameplay, BetSoft slots tend to offer a strong RTP, with upwards of 97% across a wide range of their slots games.

This isn’t a developer pumping out low quality volume games – in fact, it’s quite the opposite. There’s no doubting the developer when you load up one of their games. They’re not Microgaming or Playtech, and you can clearly see they’ve put a lot of effort into making the games as good as possible.

BetSoft joins the likes of Yggdrasil Gaming as part of a new wave of games developers, with the specific focus on slots delivering impressive results so far. If the likes of NetEnt and Microgaming don’t continue to step up their game, it’s quality like this that could well see BetSoft gain increasing recognition in future.

This Safari-themed slots game is a delight to behold. Five reels, 1024 ways to win, and an RTP of 95.26%, the game action takes place against the backdrop of the Serengeti. The graphics, animations and game design all tie in to create a high quality, realistic slots game that really packs a punch. Lookout for all manner of African animals, including gazelles, giraffes and the majestic titular elephant, which leaps out from the reel positions as the game’s highest value symbol.

The main win stands at up to 4,000 coins for five scatter symbols, which also triggers 20 free spins, or 1500 coins for landing five of the elephant symbols in a combination. With free spin bonuses thrown into the mix, along with wilds that bring extra multipliers, and a double up feature that lets you go double or quits on winning bets, there’s more than enough action to keep you coming back for more.

Blood Eternal shows the versatility of BetSoft as a slot designer, and appeals to an altogether different demographic to Stampede. This is a gothic vampire-style slot, with gargoyles, crucifixes and blood-sucking vampires finding their place on the reels amongst gothic high card symbols, spooky castles and other horror-themed graphics. There’s an atmosphere about this game that’s incredibly appealing for fans of horror films, or even for those just looking to spin something a bit different.

Unusually, there are 6 reels in this game, 30 paylines, and an RTP that nudges above 95%. The maximum win stands at an impressive 10,000x. There are plenty of bonus features packed in, including free spins, multipliers and the chance to double up on winning spins, all set against the backdrop of a spooky, gothic vampire’s lair.

Fishing-themed slots aren’t something you come across every day, although they are a popular sub-niche in slots. The Angler from BetSoft has completely redefined expectations for slots of this kind, starting with the graphics that look like something straight from a Hollywood animated blockbuster. This is a five reel game with 20 paylines, but the gameplay is far from standard.

The oyster scatter symbol triggers the pearl free spins bonus, where the game moves under the water for the free spins bonus feature, with sticky wilds thrown in for good measure. There’s also wilds throughout the game, which help complete your payline, as well as decent wins of up to 350x for spins ranging between £0.02 to £150.00. This game shows BetSoft at their most imaginative best, and sets a new standard for slots games, in terms of graphics, animations and playability.

Security is a big deal in online casino gaming, and it’s one of the first things on the checklist for BetSoft when they are developing new games. Game servers are secured and encrypted to prevent external hacks, while much of the security player-side is delivered by the legitimate licensed casinos offering BetSoft games. That means you often benefit from a minimum of 128-bit SSL encryption, plus all the security features of a third-party payment processor, for creating multiple tiers of security ahead of every spin.

It’s also worth noting that BetSoft don’t receive any personal information about you, or handle any of the transactional details around your casino account. These are functions of the casino operator, and if you play with one of our recommended BetSoft casinos above, you can rest assured the security side is as tight as possible.

BetSoft is also audited by respected gaming industry auditors NMI Gaming, which ensures their games are random and fair, in accordance with their published RTPs.

BetSoft is a games developer rather than a casino operator, so strictly doesn’t require licensing in most jurisdictions in which it operates. However, the parent company, BetSoft Gaming Limited, holds licenses from the respected jurisdiction of Malta, as well as Curacao and more recently, Italy, to offer extra peace of mind to its players.

Licensing by the Malta Gaming Authority is one of the default choices for the world’s leading gambling companies, and ensures a high standard of oversight from a recognized, EU-based regulator.

BetSoft has picked up a number of industry awards, including in consecutive years at the EGR Awards, in 2016 and 2017. The firm has also won awards from Login Casino, as well as being shortlisted for Best Casino Content Supplier at EGR Nordics Gaming Awards.

BetSoft was founded back in 2006, to bring 3D animations to a world of online casino games that was still largely in its infancy. By 2010, the firm had developed their flagship Slots3 range, the series of 3D animated slots games that really put them on the map, in terms of their reputation for quality gaming. In 2011, the company launched their first ToGo series slot to take advantage of increasing moves towards mobile gambling, as they continued to develop into a serious industry player.

Gradually building their reputation, 2014 saw the company obtain a Class 4 license from the respected Malta Gaming Authority for the first time. Last year, the company made the switch to HTML5, replacing Flash, as well as gaining certification from the AAMS to operate in the Italian market.

With the company now finding increasing interest in their games from casino operators and players alike, BetSoft is one games developer that could soon be challenging for a more prominent role.